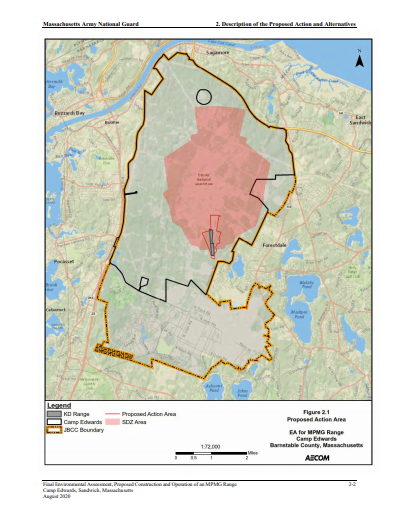 Last year the Massachusetts Army National Guard submitted an environmental assessment for the proposed machine gun range at Camp Edwards, a 15,000 acre military base occupying large parts of Sandwich and Bourne on Cape Cod. Not surprisingly, the Army found itself innocent of any possible harm this range might pose to the people and environment around the base -- it came to a "finding of no significant impact."  According to the Army, the range would require 170 acres  to be clear cut, plus 29 more acres disturbed. In addition, a "surface danger zone" of 5,197 acres would be established roughly north of the range. The machine gun firing point is about a half mile west of Snake Pond, and 2/10th of a mile from a residential area around Snake Pond. According to the Army document, "peak usage would occur from May through June" including night firing from sundown to 2:00 AM, for up to 74 days per year.

Forestdale residents and quite a few people in the southern part of Sandwich and the northern part of Mashpee are familiar with the sound of .50 caliber machine gun fire from the old days, when it was also considered okay to fire 155 mm Howitzer artillery which rattled windows everywhere on the Upper Cape, until the EPA called a halt to that practice in 1997. The machine gun range will bring sounds of gunfire back to quiet residential areas at all hours of day and night.

The Army environmental assessment is notable for the attention it pays to the needs of the Massachusetts National Guard and its indifference to the interests of people living around the base. Large sections of  the assessment are devoted to arguing that the range is needed (the Guard puts this word in bold) for troop training, the importance of this training, and the idea that it can't reasonably be done elsewhere. The document couldn't avoid at least some mention of the immense damage this base caused historically in terms of pollution of the Sagamore lens of the aquifer which provides water for Falmouth, Mashpee, Sandwich, and Bourne. But it finds that the same activities which caused this damage before will not do so today -- it claims groundwater won't be affected and people won't be bothered by the noise. The past history of indifference on the part of the military to environmental concerns of surrounding communities does not bear this out.

The military is not only blind to the fact that a large population has grown up around the base since it was founded, they actually consider this to be "incompatible development" and an "encroachment" on their freedom to operate. These words are in the assessment. While many people are lucky to have a rental or a small fraction of an acre to live on, the local military has full use of 20,000 acres of unzoned land (Otis + Camp Edwards), armed checkpoints, and is now announcing that they "have taken measures to restrict encroachment in lands adjacent to the installation." The attitude here is that the public are intruding in their space. In the 1990s the Pentagon treated complaints about environmental pollution as first and foremost a public relations problem, an annoyance, and not a threat to the health and safety of the people they claimed to be protecting.

This attitude of base commanders to the surrounding community is revealed by an astounding June 1, 2021 letter from base commander Brigadier General Chris Faux to the head of the Cape Cod Chamber of Commerce. In the letter General Faux threatens to retaliate against the Chamber for its lack of support for the machine gun range by saying he will order soldiers to stay on base to prevent them from patronizing area businesses. General Faux adds that he will also encourage base employees to "shop and spend money on the other side of the bridge." In other words, he intends to use base employees and troops he is supposed to be training for national defense in a campaign of political pressure for his machine gun range. This is highly inappropriate.

It has been twenty years since the height of protest against the harm caused by this military base. Because of its position at the top of the Upper Cape sole-source aquifer, groundwater plumes caused by massive dumping of aviation fuel, cleaning solvents, and explosives contaminated numerous public and private water supply wells both on the base and in all four surrounding towns. It seems the Army is banking on local residents forgetting or not knowing about this history. As before, it also hopes to sneak by without the public noticing. The announcement of this project originally appeared in the legal notices section in small print in the Cape Cod Times. It is hard to avoid the impression of contempt base officials seem to hold for the civilian public. The project is overwhelmingly opposed, especially by people in neighborhoods adjacent to the proposed range. Why can't base officials recognize and respect that?

The area this gun range is proposed for happens to be part of what is called the Upper Cape Water Supply Reserve, established in 2002, after much effort was made by the community, the base, and local officials to protect the aquifer that supplies our drinking water. Siting a 200 acre clearcut  machine gun range, with 5,000 acres reserve use, is absolutely wrong on top of this Water Reserve. There is abundant evidence of the environmental harm caused by the base since it became a Superfund site in 1989.  Upper Cape residents have sacrificed enough for the Army National Guard's training needs.