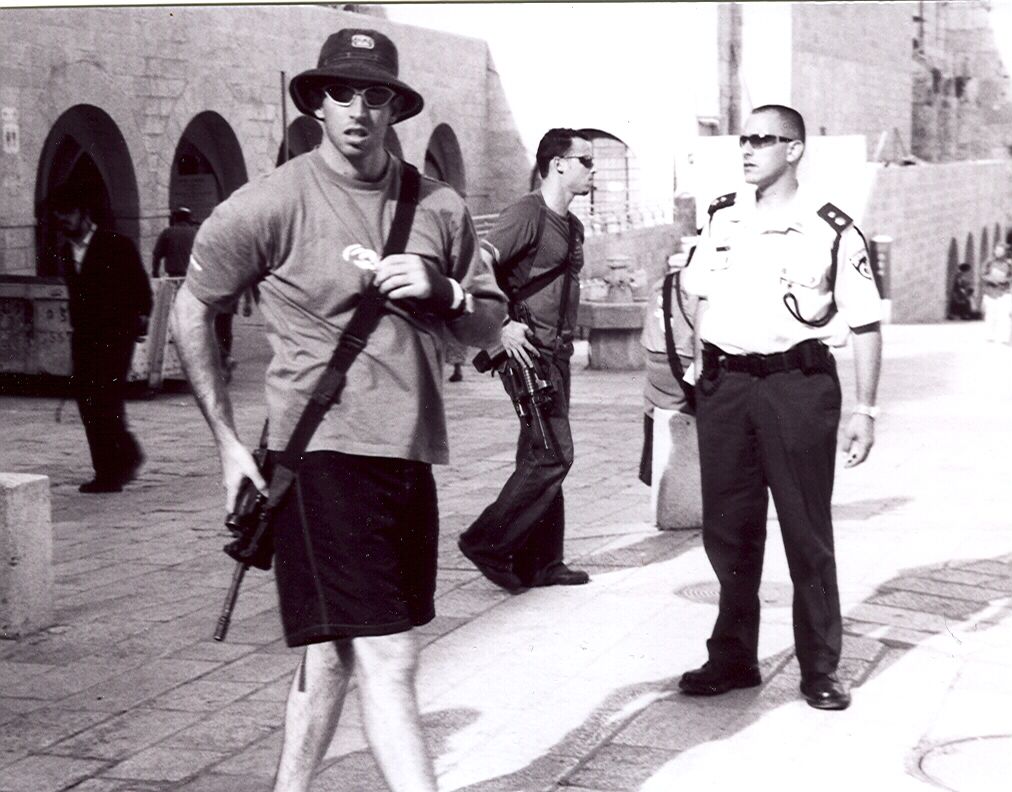 A few years ago an ambassador from France called Israel a "shitty little country" and lost his job for these three true words. To those from outside, Israel has imposed itself in all the ways typical of fascism. It intentionally frustrates rational procedure with absurd bureaucracy. It putsM-16 rifles in the hands of teenage brats, some in uniform, some not, who  fetishize their weapons with small decorations, and who would have no personal power without such weapons. In totalitarian fashion, it has put cameras in the thousand-year-old streets of Jerusalem to spy on people day in and day out. Young Israeli police with pistols drawn stand at the entrance to homes stolen by settlers, determined to live in conflict with their neighbors. The settlers walk around with pistols and walkie-talkies and other security paraphernalia sticking out of belts circling their fat asses. They are completely at odds with the people and setting around them. One wonders how they live with any equanimity.

The homes of the settlers are marked by dirty Israeli flags. So often displayed at dusty checkpoints manned by soldiers, the flags themselves become associated with dirt and violence. The occupation forces each day post five male and female soldiers inside the Damascus gate. Their assignment seems to be to do nothing more than strut, joke with one another, and display arrogance. Occasionally they find a pretext to harass a Palestinian, and ask for papers. When they get food at a stand, they leave the paper dishes behind them for others to pick up.

The day the Israelis assassinated Dr. ‘Abdul ‘Aziz al-Rantissi, leader of the Islamic Resistance Movement in the Gaza Strip, we saw pictures of the hospital bed in Gaza where Rantissi, covered with shrapnel wounds, was rushed to treatment, already dead. Then we saw pictures of Sharon, a grotesque sloth wearing an expensive coat and tie, holding a meeting in a clean, air-conditioned conference room. Here the dirt was clean and the clean was dirty.

Recently the section of the Wall which has been constructed in Abu-Dis, just outside of Al-Quds, prevented a man who'd had a heart attack from reaching an ambulance waiting for him 100 meters away. The Wall is guarded by teenagers with their guns wearing the omnipresent green IOF uniform. Fascists love uniforms. They love order. They love authority. From behind these they indulge their taste for sadism and crassness, making the elderly suffer in the hot sun, making women with heavy bags stand and wait, always threatening people with guns. They are examples of barbarity -- the same as that shown by US and British soldiers at Al-Ghraib. The joking soldier in the photographs gesturing lewdly at hooded Iraqi prisoners reveals the confident racism and sense of superiority of the oppressor. At the same time it reveals his degeneracy.

Fascists are bullies who can't bear fineness and beauty. Thus the ransacking of the museums of antiquity in Baghdad by ignorant yahoos from Fort Bragg. Thus the sneaking, anonymous Israeli sniper firing at a strong Palestinian child. No matter what they do, the fascists always lose. It is something they carry with them.

Palestine, meanwhile, is a beautiful and large country. Many ambassadors have praised it.