"My name is Bill Gates, King of Kings" 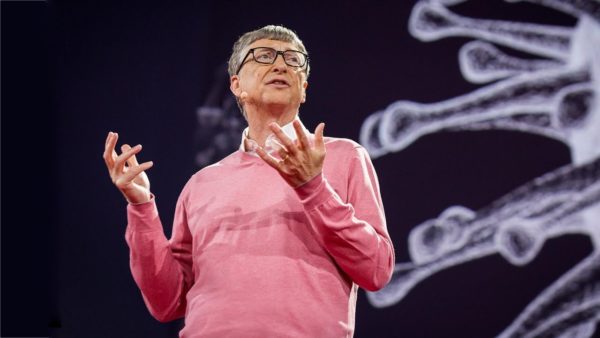 My name is Ozymandias, King of Kings,

Look on my Works, ye Mighty, and despair!

The evidence is in. Gene-manipulating injections advertised as a “vaccine for covid 19” have killed and injured millions of people. Instead of providing immunity to an alleged virus, the shots actually harm the immune system and turn it against us. The spike proteins created by the shots spread out to attack major organs in the body, leading to a thousand and one different health problems, including heart attacks, myocarditis, pericarditis, strokes, blood clots, spontaneous abortions, neurological disorders, depression, and death. Yet the medical establishment is urging everyone, including pregnant women and children, to get the jab. The ghost standing in as US President recently decreed that if people refuse the shot they will lose their job. This is coercion to accept a medical intervention known to be a danger to human health — a crime against humanity. Half the population of the country is now facing this coercion.

This only makes sense if we reason that the authorities want to harm us, or that there is something so important in the injection that they don’t mind harming us, as long as we get the injection. Bill Gates said early in 2020 that everyone on the planet should be “vaccinated.” Perhaps his dream was that when that is accomplished there will be no one left who will not be genetically modified (to Gates's secret specifications) and thus no one left to hold him to account.

One of the most insidious arguments put forward by the authorities is that we are facing a health crisis so serious that individual freedom must be sacrificed for the common good, and therefore no one has a moral right to refuse the Frankenshot. This argument quickly comes down to whether human beings have inalienable rights — rights given to us by God, which the state does not have the power to take away or overrule. To accept or reject any substance being given to us is obviously such a right. And after this we can discuss the details — that the purpose of the “vaccine” is unclear, that its contents are unknown, that it has proven harmful to millions of people, that we were not informed of adverse effects, that natural immunity should be recognized, that tests establishing the alleged disease were fraudulent, that there is no emergency, that there are safe alternative treatments, et cetera. But if we understand that the state is a lesser power, then we understand that it does not have the authority to order substances injected into our bodies.

We hold these truths to be self-evident, that all men are created equal, that they are endowed by their Creator with certain unalienable Rights, that among these are Life, Liberty and the pursuit of Happiness.

The cabal behind the medical tyranny we are facing doesn’t believe we have God-given rights because they don’t believe there’s a God in the first place. They apparently think that since they are billionaires, and billionaires have a lot of weight to throw around, that they can be gods. They also seem to believe there is nothing they are forbidden to do to other people because other people do not have souls — they are just biological entities evolved through random nature which the rich, by virtue of their power, are free to manipulate and improve upon. To technocrats, nothing is sacred. So it makes sense to them to risk injuring pregnant women and children and even experiment on the whole human race (beside their chosen few). Those who resist are now being segregated and punished, like Palestinians in their own land. Perhaps occupied Palestine is the oligarchs’ model for our future.

The ultimate goal may be the power that previous master-slave relationships were not able to achieve — a “read/write” capability in which the master has full surveillance power over the slaves and gives the orders for them to follow. Subtracted from the slave population, of course, will be those few billion dissidents and “useless eaters” who don’t fit in with the plan. They will be terminated. From this point of view it also follows that the genetic makeup of any living thing is just software which today’s sophisticated scientists can splice, delete, modify, or re-create as the masters see fit. From this point of view humans are no different than GM corn, soy, or cotton. GM humans can be used to bring in a nice profit as well because the masters will own their patents. Perhaps Monsanto agribusiness is another model for our future.

Taken to its logical extreme, reality itself is in the hands of our would-be masters. With proper control of the media, people can be made to believe anything, like that an illness similar to the flu is a “pandemic,” or that someone who has no symptoms of illness is actually sick, or that the unvaccinated are selfishly threatening everyone else with death, or that anyone who strays from the narrative is spreading “misinformation,” or that if someone goes into convulsions directly after getting jabbed it is not due to the poison that was just injected into them, or that a serum that injures and kills is “safe and effective.” In this world, the truth is what the powerful say it is, regardless of the facts. The powerful are a locomotive big enough to just run past any anomalies and contradictions, leaving us bewildered.

However, the ambitiousness of this insane program foretells its failure. History is full of great tyrants with grand plans who came in with spectacular fame but suddenly fell in disgrace, erased by time. The oligarchs’ main weakness is their lack of any sense of limits. Gaining some power, they then want it all. They reach too far, too soon, and expose themselves in the process. And then common humanity — always patient to a fault — finally decides to stand up and become a locomotive itself, running back over the entire plan and returning us to sanity.

If the world is going to see a great reset, it will not be the one Klaus Schwab and his Davos gangsters had in mind.

We should take heart. So much has been revealed! It’s as if the world’s worst criminals burst into the courtroom and made a horrendous public confession.

I met a traveller from an antique land,

Who said -- "Two vast and trunkless legs of stone

Half sunk a shattered visage lies, whose frown,

And wrinkled lip, and sneer of cold command,

Tell that its sculptor well those passions read

Which yet survive, stamped on these lifeless things,

The hand that mocked them, and the heart that fed;

And on the pedestal, these words appear:

My name is Ozymandias, King of Kings,

Look on my Works, ye Mighty, and despair!

Nothing beside remains. Round the decay

Of that colossal Wreck, boundless and bare

The lone and level sands stretch far and away."

"Shut up And Follow The Narrative!" 1 minute zombie video:

-- "MONOPOLY: Who Owns the World?" One hour documentary by Tim Gielen. https://www.stopworldcontrol.com/monopoly/