As if polluting billions of gallons of drinking water beneath and in all directions around the 20,000 acre Massachusetts Military Reservation were not enough, the Pentagon now wants to make western Cape Cod a key outpost in a new incarnation of "Star Wars" known as the National Missile Defense program.

Since 1979 the US Air Force "Space Command" has been operating a high-powered radar station called PAVE PAWS at the Massachusetts Military Reservation (the second half of this acronym stands for "Phased Array Warning System"). The radar is built  on  a hill 270 feet above the Cape Cod Canal in a strangely-shaped silver ten-story structure with two sides facing east over the Atlantic Ocean. For the past 22 years, the purpose of the radar, according to the Air Force, has been to provide early warning of a ballistic missile launch and to track satellites and space objects (space junk) in orbit around the Earth. Cape Codders objected to the radar when it was originally built on the basis of the threat to public health posed by constant exposure to pulses of powerful radiofrequency radiation emitted by the radar. The Air Force has assured the public that the radiation is safe because it is below a standard set by the Institute of Electrical and Electronic Engineers in 1991 – a standard based on the assumption that harm to human health only begins when the radiation has a thermal effect – in other words, when it starts cooking you. 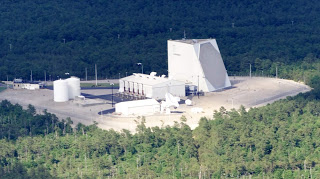 Raytheon, another Massachusetts-based dealer in death, has indeed developed for the Pentagon a Humvee-mounted "pain gun" which uses microwave energy to have just this effect -- causing pain by heating human skin – for what it calls "crowd control."  But below the thermal level, there are a number of harmful effects on brain chemistry, the immune system, and  molecular structure which may be caused by this radiation. To date, the health effects of the specific phased array radiation generated by PAVE PAWS have simply never been studied.

The PAVE PAWS health issue is alive again on Cape Cod because something called the  Ballistic Missile Defense Organization – an agency within the Department of Defense -- announced a year ago that it wants to "upgrade" the PAVE PAWS radar for use in the National Missile Defense program. Two other PAVE PAWS radars – one in northern California at Beale Air Force Base, and the other in  central Alaska at Clear Air Force Station – are also to be used as "early warning stations."  For Cape Codders there is now added to health concerns the moral problem of allowing a major component of a Pentagon weapons system capable of endangering all the world to be built on the land they live on.

National Missile Defense, like its corollary, Theater Missile Defense, is a patently offensive program. It is a part of a militarization of space led by the Pentagon since the importation of Nazi rocket scientists after World War II and the beginning of the U.S. space program under NASA in the late ‘50’s. Its purpose its not defense against ballistic missiles fired by so-called "rogue nations" but rather to serve as a major weapon in an aggressive war of economic globalization being conducted by the United States. Theater Missile Defense is now being actively promoted by the US to provoke China and North Korea. The US bombings of Iraq in 1991 and of Yugoslavia in 1999 were both organized from space. Aggressive warfare has, in other words, already been carried out by the US from space, and the Pentagon, in even newer reaches of insanity and arrogance, has plans for full expansion into what humanity has thought of throughout history as the realm of the gods.

As proof of the Pentagon’s designs, one need only read a new illustrated pamphlet called "Vision For 2020"  in which the United States Space Command blatantly announces its intention of "dominating the space dimension of military operations to protect US interests and investment"   (US corporate interests and investments) and of "integrating Space Forces into warfighting capabilities across the full spectrum of conflict."  The phrase "full spectrum dominance" is used  to describe Pentagon plans for hegemony over the land, sea, air, and now the space above all the world, with " full force integration" of land, air and sea armaments and personnel provided from space. Among "future trends", the pamphlet foresees that "although unlikely to be challenged by a global peer competitor, the United States will continue to be challenged regionally." It says "the globalization of the world economy will also continue, with a widening between the ‘haves’ and ‘have-nots’", implying the need to keep the ‘have-nots’ (who, incidentally, have no ballistic missiles either) under strict military control.

The US Space Command, according to “Vision for 2020”, "is the only military organization with operational forces in space"  -- and it intends to keep it that way though a concept coyly termed "Control Of Space", or "the ability to assure access to space, freedom of operations within the space medium, and an ability to deny others the use of space, if required." In other words, the Pentagon will own outer space. Even Lenin did not foresee this kind of imperialism.

Finally, "Vision For 2020" lays out Pentagon plans to use space for "Global Engagement", plans which include "global surveillance and information dominance", National Missile Defense, and "Space-Based Earth Strike Weapons" – that is, spying and warfare, and the high-powered laser guns associated with the Strategic Defense Initiative or "Star Wars" program promoted by Reagan. We laughed off the death laser guns in the ‘80’s, but they never went away.

On October 13, residents of Cape Cod will take part in  an international day of protest against weapons in space, standing at the gates of PAVE PAWS. The protest, organized in connection with the Global Network Against Weapons And Nuclear Power In Space (www.space4peace.org), will take place at over 80 of the facilities around the world operated by the United States which are currently involved in the militarization of space. While George Bush and Donald Rumsfeld make speeches pushing for the National Missile Defense program, they only act as front-men for  aerospace industry corporations like Lockheed-Martin, Boeing, and Raytheon which stand to make billions on our backs, and threaten the world as never before.

As we surround the White House on September 29, it would be well to remember exactly how the corporate government represented by Bush, while claiming to be interested in national security, is in fact hell-bent on endangering us and everyone else on the planet for the sake of profits for a few. This is not science fiction. These people must be stopped.