“The Most Moral Army In The World”

Article below from Middle East Monitor


Israel soldiers shot Palestinian teen, ‘dragged him around’ and chased away ambulance 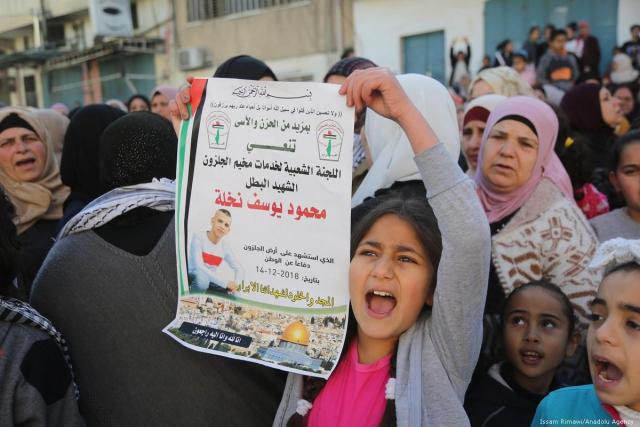 Palestinians mourn the death of Palestinian teen, Mahmoud Nakhle, who was shot by Israeli forces and then dragged around on 14 December 2018 [Issam Rimawi/Anadolu Agency]

The confrontations between residents and soldiers had already slowed down when Israeli forces “began chasing after the youths” and “suddenly…started shooting, using live ammunition”.

According to the paper, Nakhle was returning home “by way of a dirt path that passes above the camp”, when “the soldiers ran after him and one of them shot him once, in the lower back”.

The soldiers lifted Nakhle up and carried him a few dozen metres away, “laying him down at the side of the road”; one eyewitness said they carried him “like you haul a slaughtered sheep”.

After a few minutes, soldiers lifted the boy up again, and “carried him a few dozen metres more”. A Palestinian ambulance “was chased off by the soldiers, who threatened the driver with their rifles”. As far as is known, Haaretz reported, “the soldiers did not give Nakhle any sort of medical aid”.

It was only after a quarter of an hour “that the soldiers allowed an ambulance to be summoned”, but Mahmoud died en route to the hospital.

His death certificate states that the teen “died from loss of blood after a bullet entered his lower back, struck his liver and hit a main artery, damaging other internal organs”.

The paper described how “Mahmoud attended school until the 10th grade and then studied electrical engineering at a professional college”. After a year of apprenticeship, he had been “waiting to find a job as an electrician”. He is survived by his parents and two sisters aged 14 and four.

The Israeli military spokesperson told Haaretz “a Palestinian holding a suspicious object approached one of the soldiers” when “the soldier fired at him”. The incident is being investigated by the Military Police, who routinely whitewash the killing of Palestinians by Israeli occupation forces.