After almost ninety years of environmental abuse, the people of Cape Cod, Massachusetts have forced the Army and Department of Defense to end the bombardment of the Camp Edwards impact area with mortar, rocket, and artillery fire and to clean up the unexploded ordnance, contaminated soil, and polluted groundwater which this bombardment has left behind. The cleanup will be enforced by the Environmental Protection Agency under the Safe Drinking Water Act by an administrative order which went into effect January 14, 2000. This order follows two other orders in 1997 which required an environmental study of Camp Edwards and a “cease fire” of the guns that have been firing there steadily since World War I. This response by EPA was the outcome of years of struggle by residents living around the base concerned about noise, high cancer rates, and contamination of water supplies. The DoD has fiercely resisted the order because it will set a precedent by which it could be held responsible for remediation of 65 million acres of active and inactive firing ranges it owns in the United States. Liability for ranges at U.S. bases in other countries is also an obvious factor, though the environment in other countries has never been of particular concern to the Pentagon.

Camp Edwards comprises two thirds of the 21,000 acre Massachusetts Military Reservation, which also hosts Otis Air Base, one of the most notorious Superfund sites in the United States. The historic dumping of toxic fuels and cleaning solvents at Otis has already caused the destruction of large areas of western Cape Cod’s aquifer with many large plumes of contaminated groundwater. This aquifer is the sole source of drinking water for the region’s 200,000 year-round and 500,000 seasonal residents.

Camp Edwards, just north of Otis Air Base, happens to be at the very top of this mound-shaped aquifer, which means that explosives left behind from military training  can travel to nearby ponds, wetlands, and water supply wells in all directions. Among the munitions-related contaminants detected in groundwater at Camp Edwards, in the towns of Bourne and Sandwich, are RDX, TNT, HMX, DNT, and Nitroglycerine. Levels of RDX in groundwater downgradient of a high-use demolition area on the base are as high as 370 parts per billion. EPA’s “lifetime health advisory” for this compound is 2 parts per billion.

The advances made on Cape Cod for protection of human health and the environment are relevant to communities all over the world suffering from the DoD’s war against the biosphere. Vieques, Puerto Rico is a case in point. Last November, Dr. Joel Feigenbaum, an activist from Cape Cod, visited Vieques to urge resisters there to use existing environmental laws in order to bring about an end to Navy bombing,  a study of the effects of this bombing, and full restoration of the land. None of this has been provided. Instead, on January 31, with a bribe of $40 million, President Bill Clinton signed directives stating that the U.S. Navy and Marine Corps will resume bombing of Vieques until 2003 and  that should the people of Vieques turn down a subsequent bribe of $50 million, which would allow permanent bombing, “the Live Impact Area will be swept for ordnance and fenced.” In other words, at Vieques there will be no cease fire, no study, and no cleanup of an impact area which has seen worse damage by far than Camp Edwards. Why is it that Massachusetts merits a cleanup and Puerto Rico doesn’t?  Simply put, Puerto Rico is a colony with which the United States can do as it pleases.  The same standards do not apply. 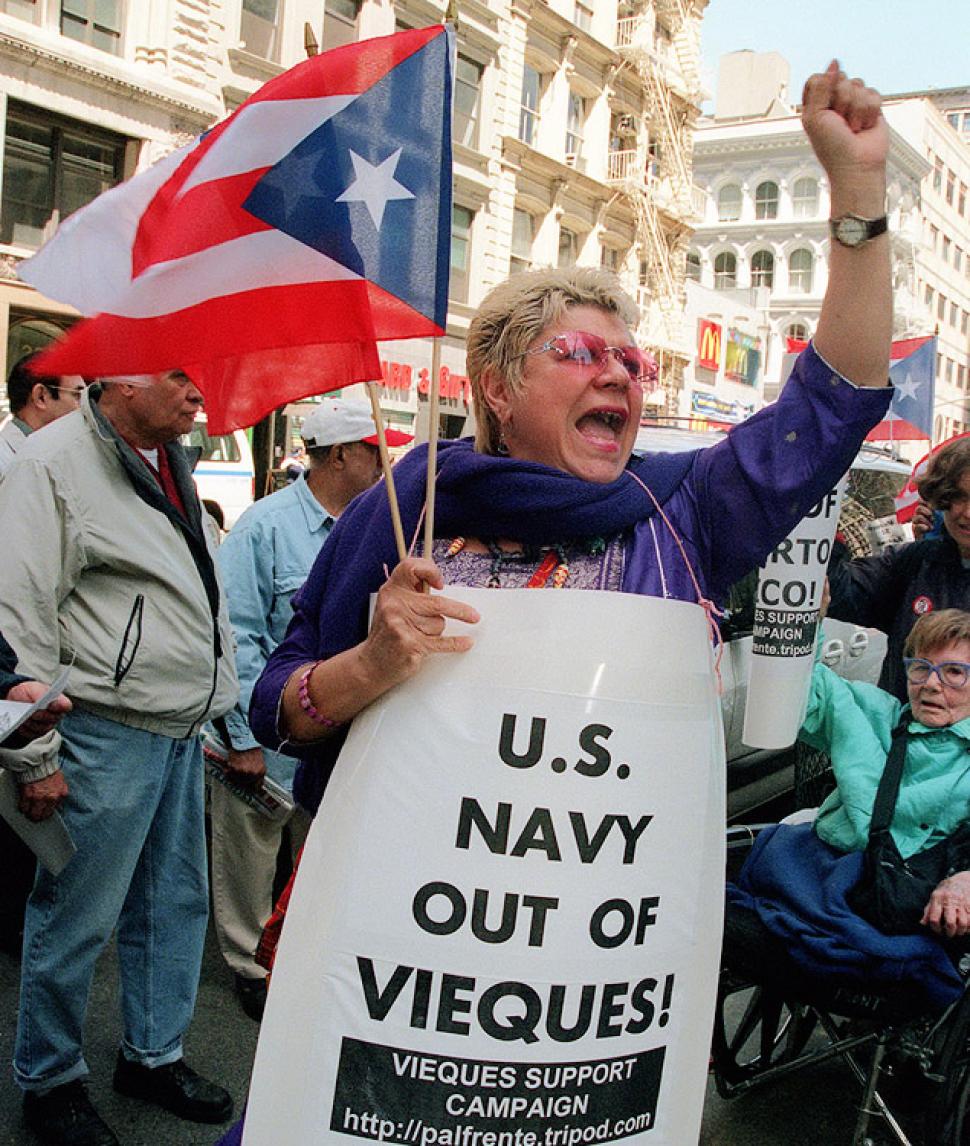 On the question of standards, Clinton’s directive states that the Vieques impact area closure will  “meet the same range standards used after the closure of the live impact area used by Naval Air Station, South Weymouth, Massachusetts.” The impact area used by the Weymouth Naval Air Station was an entire island called Nomans Land just south of Martha’s Vineyard.  At Nomans the Navy simply set its own standard, which was to find whatever unexploded ordnance was laying about, blow it up, and leave. No one was watching. Depleted uranium bullets reportedly fired by A-10 “Warthog” jets were not addressed. It is highly unfair to use Nomans as a standard for Vieques because, as the same suggests, Nomans is an uninhabited island, Vieques is not.

Clinton’s directive completely circumvents public process and is not legally binding because the next president, or Clinton himself can simply issue another directive, undoing this one. Nowhere in the United States has the cleanup of a military base been conducted with such dictatorship and with so few rights given to the community whose land the base occupies. Hundreds of U.S. bases are known now to have severe environmental problems. One day the Americans living around them will realize that they too have been colonized, just like the Viequenses.